The Aerobatic Team Arctic Eagles presents the history of Finnish civil aerobatics at the Kaivopuisto Air Show, organized 9.6.2017 by the Finnish Aviation Museum. The team follows the footsteps of the Red Birds, an aerobatic team led over three decades ago by the legendary Finnish aviator Seppo Saario. The Arctic Eagles attend the Kaivopuisto Air Show with three biplanes, originally built by Saario himself.

An aerobatic group fouded by Raimo Nikkanen, Tapio Pitkänen and Miikka Rautakoura, made their debut in 2013 under the name “Saario Special”. The name was a tribute to a legend of Finnish civil aerobatics. In 2014, the Oripää-based group performed under the name Arctic Eagles. A fourth member joined the team in 2016, Jyri Mattila – however, the team performs in Kaivopuisto with their original three-aircraft composition.

The Arctic Eagles show consists of tight formations and daring solo performances. The team members are all long-term private and professional pilots, who have exceeded in aerobatic competitions in addition to their career as performance pilots.

Seppo Saario became known in the 1950’s as an aerobatic pilot in the popular Pilvien Huimapäät aerobatic team (Daredevils of the Skies). After the team was disbanded in 1954, Saario – who worked as an airline pilot for Aero – persistently upheld civil aerobatic training in Finland. In the early 1970’s, Saario built a new, powerful Pitts Special aerobatic biplane, based on prints he acquired from the United States. The new aircraft attracted the attention of both aviation enthusiasts and the public. Saario, together with his son Pekka and Raimo Turunen, formed the aerobatic team Red Birds, and toured Finnish air shows until 1984.

After the Red Birds, Saario continued as an aerobatic instructor, and had an impact on Finnish competition aerobatics, which developed in the early 1990’s. Altogether, Saario’s aerobatic carreer lasted for almost five decades, until the 1990’s. The Pitts Special Saario built in the 1970’s, OH-XPA, is the current lead plane of the Arctic Eagles.

Read more about the performers and other program on the Museum’s www-page: https://ilmailumuseo.fi/kaivari/, or our Facebook page https://www.facebook.com/kaivariairshow/

The Kaivopuisto Air Show is a huge, free-of-charge, aviation-themed event, organized by the Finnish Aviation Museum. The Show will be held on Friday Night, 9.6.2017. Various aircraft types representing the past, present and future of Finnish Aviation will take part in the Show. The Show will take place in the air, land and sea. Partners of the event include Finavia, Finnair, Saab AB, SEK, The Finnish Aeronautical Association and the City of Vantaa.

The Legendary Red Arrows perform at the Kaivopuisto Air Show 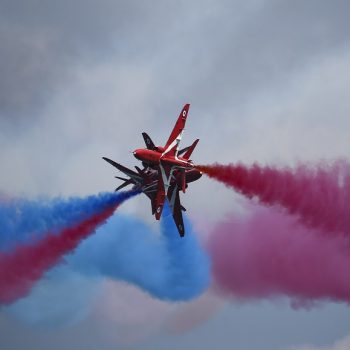