The Finnish Aviation Museum offers a unique opportunity to fly – with your feet firmly on the ground. The Museum operates four different flight simulators, from vintage civilian planes to warbirds. Book your own virtual flying experience, guided by our experienced flight instructors!

The simulators operate from Mondays to Fridays during the Museums opening hours (10 – 20) and on Saturdays 12 – 17. We recommend that you make a reservation at least one week in advance.

Gift cards from our Museum Shop or Trafiikki-webshop

PLEASE NOTE: Not in service at the moment. – Built in the cockpit of a real Piper Aztec twin-engined light aircraft, the OH-IMS simulator provides true vintage flight experiences.

The Diamond DA 42 simulator is owned by our partner, Aeropole Flight Training. It is a fully functional flight training simulator for those interested in a highly realistic flight experience in the glass cockpit of a ultra modern general aviation aircraft.

For those interested in military aviation, we offer the excitement of aerial warfare in the controls of the German Messerschmitt Bf 109, one of the most important fighter types of the Finnish Air Force during the Second World War.

Experience how a modern passenger plane is flown and see stunning scenery at realistic destinations. 220-degree curved visual makes you feel really in the air.

You are the captain at the service!

Experience a stunning experience in a simulator that mimics the real Airbus cockpit and works like a real plane. 220-degree curved visual makes you really feel in the air. Experience how a modern passenger plane is flown and see the stunning scenery at realistic destinations.

Block under construction, sorry for any inconvenience.

Book your virtual flight at least one week in advance either via email (simulaattorit @ ilmailumuseo.fi) or phone (+358 44 754 2930). Services for larger groups are handled individually.

The Airbus simulator operates on Mondays to Fridays during the opening hours.

OH-IMS vintage simulator (not in service at the moment)

Built inside the cockpit of a real twin-engine aircraft, the OH-IMS (meaning Ilmailumuseon Simulaattori, the Simulator of the Aviation Museum) offers truly unique flying experiences.

The cockpit of the simulator is an old Piper Aztec training aircraft, owned originally by the BF-Lento flight school. The plane was badly damaged in a crash landing in the late 1990s, and the front fuselage was salvaged and donated to the Museum in 2006. Our volunteer simulator enthusiasts transformed the fuselage into a simulator cockpit.

The Simulator also has a true 120 visual, projected with three video projectors.

You can book a one-hour flight in the OH-IMS simulator, where you take off on a virtual flight with our experienced flight instructor from the Helsinki Airport. The virtual flight is suitable for all, regardless of previous flying or simulator experience.

Novice pilots train the basics of flying and proper flight procedures during the flight. The more experienced pilots can try some more difficult flying techniques, fly under different weather conditions, or navigate longer flight routes via the radio systems.

Book your virtual flight at least one week in advance either via email (simulaattorit (at) ilmailumuseo.fi) or phone (+358 44 754 2930). Services for larger groups are handled individually. 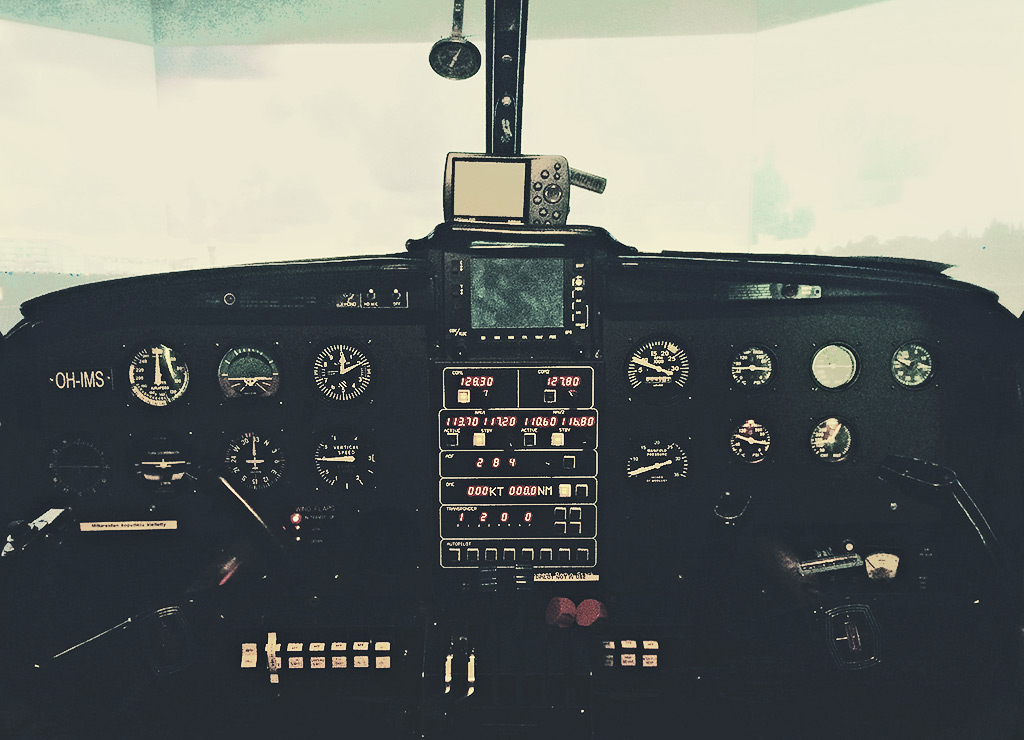 Experience the life of a professional pilot

The Diamond DA 42 simulator is a ultra-modern, fully approved training simulator, owned by our partner, Aeropole Flight School. Aside of its use in professional pilot training, the simulator also offers the museum customers a unique opportunity for a highly realistic flight experience.

You can book a one-hour virtual flight with the Diamond DA 42 simulator. The experience contains a short briefing and flying time, guided by our flight instructors.

Book your virtual flight at least one week in advance either via email (simulaattorit (at) ilmailumuseo.fi) or phone (+358 44 754 2930). Services for larger groups are handled individually. For those interested in approved pilot training, please contact Aeropole Flight Training directly.

The Messerschmitt Bf 109 simulator offers a real-like experience of piloting a World War II -era fighter aircraft. Grab the controls of the Messerschmitt Bf 109 G2, one of the most important fighter types of the Finnish Air Force during the War, with which many Finnish fighter aces gained fame in the heated battles of the end of the War. The cockpit is a replica of the famed German fighter, with all proper controls. The three-projector visual projects front and side views around the pilot.

The simulator is built by a group of volunteers of the Virtual Pilots association, and sponsored by the Aviation Museum Association.

There are various 30 and 60 minute concepts available in the Messerschmitt simulator, depending on the level of experience of the customer.

The test flight offers a half-an-hour crash course in the basics of flying a World War Two fighter aircraft. You will try out some basic maneuvres, do some tricks and try some target shooting. The test flight is a good way to get familiar with virtual flying.

Our fighter pilot course covers the basics of aerial battles with the legendary Messerschmitt Bf 109 G2 fighter, with help of our experienced instructors. You get to know your aircraft and its qualities, train some basic flight maneuvers and try out the effectiveness of the weapon systems. The fighter pilot course provides an insight of what being a war pilot really was, and provides a groundwork for future virtual air war campaigns.

Virtual pilots, who already master the basics of fighter aircraft are enlisted in our fleet to fly out against the enemy in several historically-based air battle missions. The difficulty of the missions depends on the experience of the pilot. The instructor supervises the flight, but the briefing is limited to quickly going through the controls.

Book your virtual flight at least one week in advance either via email (simulaattorit (at) ilmailumuseo.fi) or phone (+358 44 754 2930). Services for larger groups are handled individually.